The UPC and the unitary patent

With the Rules of Procedure of the Unitary Patent Court (UPC) coming into force on 1 September 2022, we hereby provide some basic information on the new system and highlight some of the important decisions to be taken in relation to European patents.

It is expected that the Unified Patent Court (UPC) and the Unitary Patent (UP), will come into operation soon, most likely in the first half of 2023.

A UP is a European patent (granted under the European Patent Convention (EPC)) for which a unitary effect has been requested in the participating member states and, therefore, it is also known as a “European patent with Unitary Effect”.

The UPC is an international court set up by participating member states to deal with the infringement and validity of both Unitary Patents and European patents, created by the international Agreement on a Unified Patent Court (the UPC Agreement or UPCA). The Rules of Procedure of the UPC will regulate the procedures before the UPC.

At the outset it was intended for the UPC and the UP to encompass all the member states of the European Union (EU), however not all EU member states have signed and ratified the UPCA.

24 EU Member States signed the UPC Agreement on 19 February 2013. The UK signed the agreement but later withdrew its signature as one of the consequences of their exit of the EU.

Of the 24 member states, 16 have to date ratified the agreement. Germany is set to ratify the agreement when system appears to be ready to launch. The UPC Agreement will enter into force, on the first day of the 4th month of the deposit of the instrument of ratification by Germany.

Therefore, 17 states will have ratified the Agreement and will be participating in the UPC, upon entry into force of the UPCA (i.e., UPC participating or member States) including:

Other EPC states which will not be part of the UPC are non-EU states such as: Albania (AL), Iceland (IS), Liechtenstein (LI), Monaco (MC), North Macedonia (MK), Norway (NO), San Marino (SM), Serbia (RS), Switzerland (CH), Turkey (TR), and the United Kingdom (UK).

During a transitional period of 7 years (which may be extended another 7 years), EPs may be opted out of the jurisdiction of the UPC. So that the UPC does not have jurisdiction in participating member states of the opted-out bundle EP patent.

The UPC will also have jurisdiction over supplementary protection certificates (SPCs), unless they have been opted out or are SPCs originating from opted-out EP patents (which are automatically deemed to be opted out).

Thus, during this transitional period, proprietors of European patents (which already exist or newly granted) for which no unitary effect is claimed, have the possibility to bring their case to a national court instead of the UPC, unless the patent has already been the subject of an earlier action brought before the UPC.

This possibility does not exist for patents with a unitary effect, for which UPC always has jurisdiction.

Bringing an action before the UPC has the drawback that the court may revoke the patent for all UPC participating member states. A patentee may also have other reasons to prefer a national court in a given case.

A third party may bring a revocation action before the Central Division of the UPC to nullify a European patent for all UPC-member states.

To avoid such a central attack the proprietor of a European patent without unitary effect may register an opt-out with the registry of the UPC. In that case, a third party should bring his revocation action before the various national courts.

An opt-out must be registered by (all) the patent proprietor(s) of the EP patent in question (including all those proprietors, if different of national validations of the EP patent), before the UPC using the UPC case management system (CMS) https://cms.unified-patent-court.org/.

There will be a 3-month sunrise period for registration of such opt-outs before the start of the Unified patent Court.

Opt-outs can also be registered for pending European patent applications and supplemental protection certificates issued for a product protected by a non-unitary European patent. For unitary patents, it will not be possible to opt-out, so the UPC will have exclusive jurisdiction.

As indicated above, if no opt-out is registered the patentee still has the choice to bring his case before a national court, as long as the patent has not yet been the subject of an earlier action brought before the UPC.

In case a patentee opts out he may opt back into the UPC (by withdrawing the opt-out) at a later moment, provided that no national court action has yet commenced.

The procedures for grant, opposition or limitation remain unchanged.

Unitary effect is given upon the patentee’s request within one month after grant.

There is no official fee.

If the patent is in English, a full translation should be filed in one of the other official EU languages (e.g., if an application was first filed with a national patent office in an official EU language, including Spanish, this text may be adapted to match the granted text for this purpose). If the patent is in German or French, a full English translation should be filed. The translation must be filed together with the request for unitary effect. The translated text is for information only and has no legal effect.

The unitary effect only covers the territory of EU member states participating with the Unified Patent Court. Alternatively, the patentee may follow the classical route of national validation for these countries.

For all other member states (and extension states) of the European Patent Convention (such as non-EU members, e.g., United Kingdom (GB), Switzerland (CH), Norway (NO), etc, and non-participating EU members, e.g., Spain (ES), Poland (PL) and Croatia (HR)), the classic route of national validation should be followed.

To maintain a European patent with unitary effect, a single annuity fee is payable. The payable amount will correspond to the combined renewal fees due in the four countries where European patents were most often validated in 2015, when the fee level was agreed to.

The unitary patent will be a new alternative besides already existing national patents and classical national validations of bundle European patents.

Different routes will lead to patents potentially falling on different jurisdictions, and with different territorial effects. 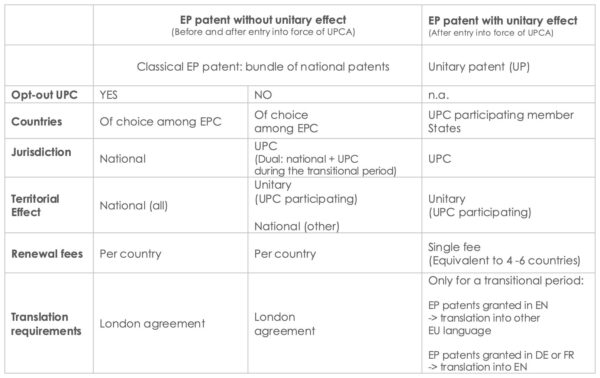 The present status of ratification of the Agreement on a Unified Patent Court can be checked on the following website: